The National Collegiate Development Conference is a 13-team tuition-free junior hockey league entirely located in the Northeastern United States. The league and all of its teams are fully united and dedicated to the mission of player development and advancement to college hockey. 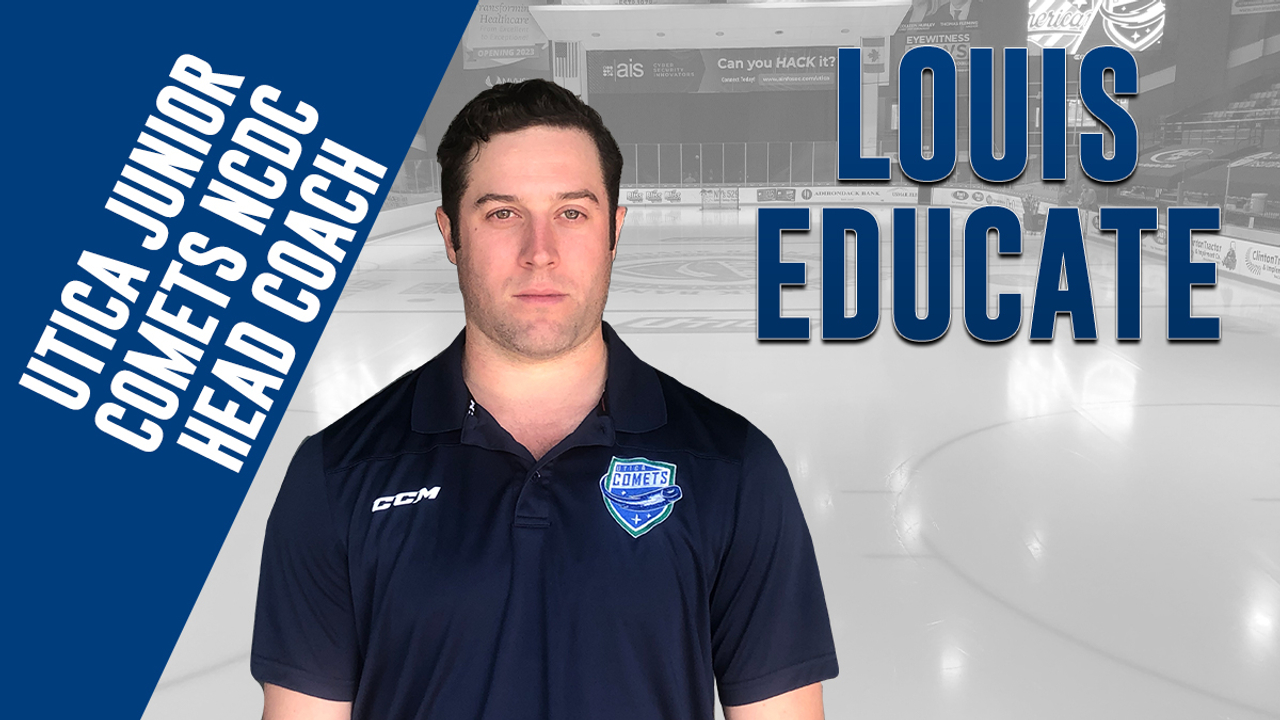 Vice President of the Utica Comets Adam Pawlick announced today the appointment of Louis Educate as coach of the Comets’ NCDC junior hockey team. Educate had previously coached the Comets’ Premier team for the past three seasons and will bring a wealth of playing and coaching experience to his new position within the junior program.

Educate is a 2015 graduate of Utica College, where he was a three-year member of the men’s hockey team, where he helped guide the Pioneers to their first ever NCAA tournament berth and an appearance in the NCAA Division III Frozen Four in 2013. During the 2012-13 season, Educate was named the ECAC West Player of the Year and a First Team All-American after finishing with 36 points (18 goals, 18 assists) in 28 games. Educate spent his freshman season at Nichols College, where he led the NCAA with 27 goals in route to being named the ECAC Northeast Rookie of the Year.

After graduation, Educate played professionally for VfE Ulm/Neu-Ulm Germany, posting 32 points (19 goals, 13 assists) in 16 games. In 2016-17, he suited up for the Huntsville Havoc, of the Southern Professional Hockey League, where he was named an SPHL All-Star after scoring 20 goals and adding 11 assists in 38 games.

Educate then went on to serve as the assistant coach for the 2017-18 Utica College Hockey team; he was instrumental in guiding them to their first UCHC regular season and postseason championship alongside long-time head coach Gary Heenan. Educate helped with all facets of the program, including day-to-day operations, scouting, recruiting, as well as game and practice preparation.

Originally from Chicago, Illinois, Educate has been involved in youth hockey for several years. During the summers, he coached tournament teams, ran power skating sessions and skill camps with the Above and Beyond Hockey program. He now resides in New Hartford, NY.

“I am extremely excited to have been given the opportunity to serve as the head coach of the Utica Junior Comets NCDC team,” expressed Educate. “I look forward to working with our players and continuing to build a great culture and winning environment. We will have a major focus on player development, not only on the ice but off the ice as well. Ultimately, this will give players a great experience in Utica where they can develop the tools necessary to be successful at the next level.”

“We are looking forward to having Louis Educate as our NCDC Head Coach,” said Comets Vice President Adam Pawlick. “He brings an infectious attitude to the rink each day and strives to develop each and every player he interacts with. He is committed to creating an environment that pushes each player to the highest level and teaches them to be valuable leaders in the community.”